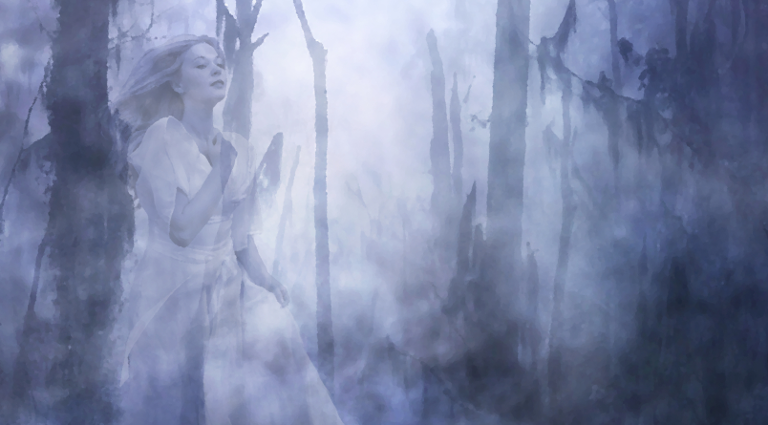 The stink of the brown waters assaulted my nose. Reeds decayed in mirror-still shallows, and the tattered carcass of a fen ray bobbed under the greedy attention of a crow. Vapors oozed from the spongy earth. As the sun descended, they chilled and thickened into mist.

Perched upon the snowy flanks of the Moonfall Mountains, the sun was a vigilant eye. Afer traveling the bog for three days, I had learned what happened at sunset. I tried not to think about mournful faces coalescing out of the mist.

Tonight I hoped to see village lights winking on the horizon, but there were only plains of darkening water, grim faces of encircling mountains, and the endless dyke upon which we traveled. Shifting on the cart’s hard bench, I asked the Venerable Orn, “Shouldn’t we be there by now?”

Hunched beside me, the reins laced through his fingers, my mentor sighed, “Soon, Imaen. The men from Stonewenn Ford assured me that we’d reach Fellwater within two days. There we’ll have proper shelter and hot ray stew and a mug of ale.” A contented grin crinkled his close-cropped beard.

I glowered at him. After enduring the icy wind for three hundred miles, sleeping on rocky ground and in flea-ridden inns, and staring at the swaying arse of the black mule, it would take more than ray stew to make me happy. “I thought you said the people of Fellwater wouldn’t be hospitable.”

“I said, ‘Don’t expect a warm welcome.’ Doesn’t mean they’ll abuse us as they did our predecessors. It was the villagers who sent for us this time, after all. I’m sure the bog-dwellers are fine people. They just don’t like outsiders intruding on their ways. Unless they feel their need is great.”

“Humph. I suppose even bog-dwellers would consider an outbreak of restless spirits a great need.”

When a summons had arrived at the Temple of the Merciful Dragon, pleading for the aid of a Darashani exorcist, Orn had insisted I accompany him. Short of kicking and screaming, I had no choice but to climb into the two-wheeled cart and suffer the long, jostling ride north from Iryth to Rahn’s borderlands. Now, the tired black mule tugged the cart along tracks worn into the top of the dyke, and my bones throbbed a revolt against the bench seat.

“Never fret, Imaen,” said Orn. “The people of Fellwater may have changed their tone since Venerable Raelos paid them a visit. The hauntings have clearly gotten worse.”

“So I’ve seen.” The memory of our first night inthe bog sent a shiver through my skin. We had stopped in the village of Briar’s Nest, where the people offered us a hovel that smelled strongly of moldy sheep’s wool and yesterday’s fish. The bog-dwellers’ roundhouses, erected upon stout stilts, were large enough to accomodate us comfortably, but the people of Briar’s Nest had made it clear that a priest and priestess of Darashán weren’t welcome.

Just as we’d laid out our bedrolls, Orn and I heard a mournful sob rising from the waters. Beneath the collar of my under-robe, the hairs on my nape had pricked up. I followed Orn out onto the decking. In the twilight, the wraithling wandered from pool to pool, a girl-child, no more than five years old when she’d died. Long wet hair dripped about a swollen gray face, and she wrung her hands, weeping, “Lost . . . lost, mama . . . lost.”

Orn ventured into the squelching mire in an attempt to communicate with the wraithling, despite my frantic attempts to stay him. On the decking of a nearby roundhouse, a young woman emerged, hands over her ears, and sobbed, “Hazel, go to sleep! Leave us, oh, gods, leave us.”

The wraithling paused amid an icy pool, as if hearing the familiar voice from across a great distance, but she soon continued her aimless wandering. By the time Orn reached the ice-encrusted pool, the little girl had vanished into the gathering mist.

The cart splashed through a muddy hole. “Gods,” I sighed, “how did I let you drag me into this forsaken wasteland? I almost miss the cloister.” Clean, bright, and blessedly free of restless spirits.

I rounded on him. “If you brought me along hoping I’d regain fondness for the temple, you’ve failed miserably. As soon as we return, I mean to hand you my resignation. Again.”

“I shall decline it. Again.”

“I don’t belong there, Orn!” I pleaded. “I should never have taken vows.” The marble halls had witnessed my faith withering like an arthritic hand. Now my faith trailed after me, useless, agonizing, and Orn refused to let me shed it once and for all.

He cast me a wise, affectionate smile. “Abandon Darashán, child, and you’ll always regret it. You’ve the most tender of hearts, and you’ve seen how the dying trust you in their time of passing.”

“That was before Cambryn Island,” I retorted, hoping to put an end to the argument. Sometimes I dreamt the fever had resurged, and this time I could not escape it. I knew for certain I was dying. Always I awoke weeping and lying in sweat-chilled sheets.

Traveling through Blackfen Bog, I found myself part of a new nightmare. Here, the dead walked night after night, torn somehow from the natural order. I might’ve been one of them, I realized, drifting between worlds, unable to find my way . . .

“How are we to exorcize so many?” I asked.

“We don’t. We just find the source of the problem.”

“But what could be causing this . . . infestation?”

“Forgotten your studies as an acolyte?”

“Then what caused the haunting of the royal castle in the Third Year of King Tiriel?”

Annoyed that I was being tested like an initiate, I said, “Necromancy, of course.”

“Precisely. And who knows what kind of magic these bog-people dabble in. Likely they brought the problem upon themselves, and it’s finally gotten out of hand.”

His nonchalance amazed me. Truly, Orn was without fear.

Smiling fondly, I gazed over his graying head at the summit of the Iron Finger; the remnants of orange light had bled out of the snow. A shudder stole through my robes. I could blame the chill on the late winter air, but I would be lying to myself. Dusk had fallen, and neither of us had noticed. The sun, hidden behind the ragged face of Mount Godscrown, bled a flush of feverish color onto the underbellies of low, swift clouds.

Orn hauled back on the reins. The mule complained, shook her ugly head, and stopped amidst the ruts. “We’ll camp here.”

Generations ago, the bog-dwellers had shaped the dyke, load by load, into a straight, mountainous structure that ran on for fifty miles. Far below, winter-yellowed sedge gathered in tufts, and new growths of cattails had begun creeping out of the mire. Patches of snow still clung to the north side of the slope, and fragile ice glistened on the edges of the pools.

“I don’t suppose you can net another of those fine fowl for supper?” Orn asked, climbing from the cart.

He knew me well; putting me to work was the surest way of staving off my fears. I retrieved the net from the back of the cart but saw few waterfowl paddling about the pools. I refused to go trekking through the stinking mud to scare up a covey. Still, while Orn unloaded the night’s provisions, I searched the nearby reeds for a stray duck or skite.

I found a wraithling instead.

He appeared beside me, not a yard away, both feet sunk in deep where the waters touched the dyke. The whites of his eyes were as gray as his face and they stared at me, desperate, pleading. “Let us in,” he said, voice accompanied by the sound of unsteady breathing, loud as a storm in my ears, though the naked youthful chest didn’t move. “Is it you I’m to ask? I don’t remember. They’re lost, don’t you see? Now I’m lost.” Rotted weeds dripped from long reddish-brown hair, and water coursed in rivulets down his face, fell like rain from his fingertips. How fair he was, and unblemished. Neither disease nor wound had taken this youth’s life. “He won’t let us in,” he said, grief emanating from him like a winter’s breath. “Please . . . won’t you show us the way?”

Pity was a stone in my throat. I longed to take his hand, lead him away into the waters. Safe. Dark. Silent.

My hand rose to touch that sorrowful face, but they passed through the apparition as if through cold water. I snatched back my hand, remembering fear, and heard Orn calling, “Imaen!” He was running down the slope of the dyke. The wraithling dissolved into a dense gray mist and drifted away over the water.

Read the rest of the story at Amazon.

None of the text above may be copied or reproduced in any way without the written permission of the author.