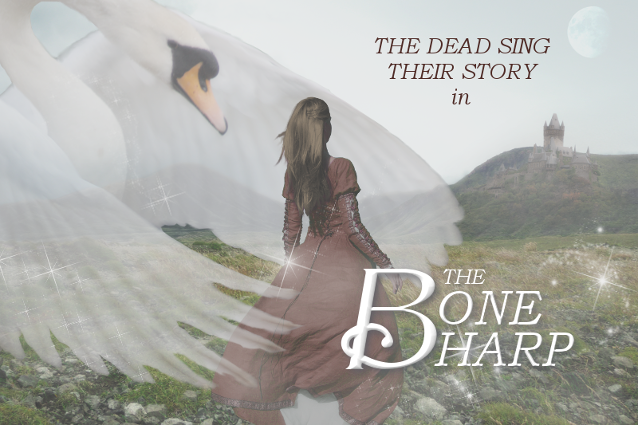 The cold fists of the floodwaters tugged at Angharad’s skirts. Twigs, leaves, and hawthorn petals gathered in swirling eddies. Her toes deep in the mud of a still pool, Angharad realized one of her shoes was missing. Her hands shook. She couldn’t make them stop. Her fingers held the memory of thrashing waters, a pulse.

A garland bobbed in the pool, and the white flowers haloed a blue eye. Gwyneth’s blue eyes, laughing, lovely, dead. A cloud of golden hair swayed a seaweed dance, and mud clung to a white cheek. One silver bubble escaped the parted lips, flitted to the surface and burst. A breath? A word? Silence.

Poor Gwyneth had slipped. So fast. Right into the swift waters, struck her head on the tree roots there. That’s what Angharad would tell them. Would they believe her? Father loved Gwyneth best. Would he blame Angharad? She heard voices through the trees. The men were to choose a tree for a May pole this morning, the maidens to gather flowers for wreaths. Would they believe her?

Gwyneth had been laughing, then she was choking. Help me! Over so quickly. The finality of it made Angharad sick. She retched in the mud. There . . . on the bank, the deep groove where Gwyneth’s heel had slipped. Yes, she would show them. They would believe. She had to make them believe. She didn’t want to spend the rest of her life locked away in the nunnery at Llanllugan. What she wanted was approaching through the trees. She could hear his voice. Whose name did he shout?

The water tugged at her sister’s feet, but Gwyneth’s skirts and wine-red cloak anchored her to the bottom. Angharad unlatched the cloak’s silver-and-ruby brooch. Gwyneth’s shoulders floated; the tip of her chin and pretty nose broke the surface. Sand in her mouth! Choking back the urge to scream, Angharad gave the shoulder a shove. The body drifted but a few inches. She kicked it hard — harder! — and Gwyneth glided toward the middle of the river. The floodwaters seized her. A glimpse of yellow hair, a white hand, nothing.

“There you are!” called Father through the damp forest-quiet. Red-faced and rotund, Lord Gwilym, Baron of the southern cantrevs, approached through the brambles, flushed from excessive wine. He lived for the festivals when he could laugh and drink with impunity. How could Angharad tell him? “We’ve chosen our tree, daughter. Come and see it.”

Beside him, Sir Llyr looked resplendent in new spring silk, golden hair catching the thin rays of sunlight just so. Angharad’s heart felt too big for her chest. Oh, to run to him, to nest in his arms while she wept for Gwyneth.

“What are you doing so near the flood, daughter. Come away, it’s dangerous.”

“Where is Gwyneth?” Llyr asked, looking at the brown roiling waters.

Angharad lifted the cloak, so heavy now that it was empty. “I could not save her.”

The day she had met Sir Llyr, Angharad took special care before her mirror, brushing her dark hair until the waves shone like deep water in the sunlight. She had never liked her hazel eyes, preferring the forget-me-not blue of Gwyneth’s, but Father said Llyr was a hunter, so perhaps hazel would remind him of the woods and fields he favored. She chose the dark green gown she’d saved for a holiday and felt beautiful until the banquet was nearly over.

Father had gone to rare extravagance for his guest. A pair of swans adorned the table, dead and brilliant, breasts and beaks touching so that their arched necks shaped a heart that made Angharad’s sisters sigh. Angharad herself didn’t care about the birds. She could hardly eat for sight of their guest. As golden as the noon-bright heavens, he seemed to boast the halo of a saint. He wore lightly the sword and dirk of a knight, and the carbuncles ornamenting the baldric across his chest appeared to have been carefully polished, for they glittered like stars upon the sea. His wit caused the Great Hall to ring with laughter. Still, Angharad pitied him; his father, the baron of a neighboring cantrev, had been shortsighted, it seemed, knighting both his sons though he could ill afford it. So as the younger, Llyr was forced to seek his path and his fortune.

Finally, the servants brought the dessert wine, and while they served the upper and lower tables, Lord Gwilym wrapped a heavy arm about Llyr’s shoulders and said, “No, no, don’t go north. Stay here. Choose one of my daughters.”

Angharad’s stomach flipped exquisitely. The girlish chatter at the lower table hushed. Llyr glanced from face to flushing face. Angharad’s heart could hardly soar higher; as the eldest, she would have precedence.

“See there, Angharad, my firstborn,” Father went on. “Though Gwyneth, beside her, is the fairer and more pleasant-tempered. The other three are too young yet. . . .”

Like a ship with a hole ripped through its hull, Angharad’s heart plummeted. Had her own father just slighted her? He had always favored Gwyneth, fair and blue-eyed and adoring, but why should he try to ruin Angharad’s chances? Her face burned, her stomach sank over and over again, but she wore a smile for the rest of the evening.

The next morning, Angharad glimpsed a sliver of hope when a servant brought word that Sir Llyr wished to meet with her in the garden after breakfast. She had to look especially fine, to undermine her father’s assessment. All her day-dresses were drably colored, so she chose one of Gwyneth’s. A pale pink with long narrow sleeves and a neckline that revealed her collar bones. She stepped into the garden, confident that she could win Llyr’s suit. But the moment she saw him, pacing impatiently beneath the spreading ash tree, Angharad’s confidence withered like leaves before the fire. It was as if her father’s words had cursed her tongue to foolish silence. Their meeting was amiable but brief. Angharad thought it a complete disaster until Llyr extended a gift to her. A brooch. A lovely thing of twisted silver. A knot . . . a bird . . . a swan, it was! She blushed, lightheaded, as Llyr pinned it upon her shoulder.

Later in the day, Gwyneth ran to her crying, “Look what he gave me!” A brooch. Silver. Studded with rubies. She ran to show Father. Humiliated, Angharad tucked hers into the bottom of her clothes chest. She never wanted to see it again.

Now she had the ruby-studded brooch. Hers . . . hers forever.

Read the rest of the haunting and tragic tale in Twice Upon A Time, an anthology by Bearded Scribe Press, available at Amazon.

None of the text of “The Bone Harp” may be reproduced or copied without the written permission of the author.